Cat senses – can cats see in the dark?

Much is said about the cats’ ability to see in the dark, this is largely true, but not entirely. It is true that the cat copes well after dark – his eye needs about 6 times less light than human. What’s even more interesting, the cat sees at night almost as well as on a sunny day – the cat’s eye regulates the amount of light flowing into the retina like a camera. 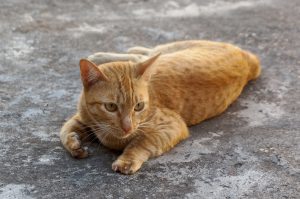 However, it is not true that the cat sees in total darkness, it is physically impossible. The eye “sees” only because the light reaches it – different animals need it in different quantities, but seeing in complete darkness is impossible. However, this does not change the fact that the cat is still doing very well in total darkness, among others thanks to its whiskers (whiskers), which allow it to avoid obstacles and constitute an excellent receptor.
The second feature that makes it easy for a cat to hunt in the dark is his above-average hearing, which we can only envy him.

Cat’s senses – how does a cat see?

An interesting thing about the cat’s eyes is that cats can see blurry. They perfectly distinguish between silhouettes, so the next time you come back from the rollers and your cat starts to be afraid of you, take off your helmet so that the cat can recognize you.

In contrast to cats, the saying “have eyes on the back of the head” has a new meaning in cats. Like dogs, cats have a very wide field of view; in dogs, it is about 250 degrees and in cats even 285 degrees. In this statistic, a man falls at least weak, because he sees only 180 degrees from the surrounding reality.

Cat’s senses – can the cat see in colors?

The cat definitely sees the color image, although for many years cats were thought not to distinguish colors. Recent studies, however, show that cats distinguish colors, but not all. Cats can distinguish shades of yellow, green or blue, but they can’t cope completely with red. Interestingly, cats cope with shades of gray best. Is it because the mice are gray? 🙂
The cat’s eye is additionally built in such a way that it copes well with motion detection, which makes it much easier for him to hunt. Thanks to this skill, a cat can see, for example, a gray mouse moving in the dark.

The third eyelid protects cats against eye damage and allows the eye to be cleaned of dirt and dust.

Cat senses – do cats have a good sense of smell?

Compared to humans, cats have a highly developed sense of smell. Shortly after birth, the kittens have an excellent sense of smell, which develops over time. It is not for nothing that the cat is said to be sniffing, it is largely the smell that decides what the cat eats and what he won’t even touch. The cat’s smell is strong enough to recognize other individuals, e.g. by the smell of their urine. However, the smell of a cat is much weaker than that of a dog. 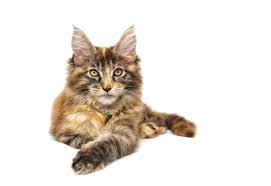 Cats can recognize the words spoken to them and learn to react to them very quickly.

The cat also quite intensively uses the so-called Plow share located in the hard palate. Simply put, it is a “pheromone receptor” that helps the cat communicate with other individuals. A human organ also has a similar organ but uses it mainly after delivery, then the organ loses its functions. In humans, the activity of this organ in adult life probably does not play a significant role, although this is still a contentious issue and still poorly studied.

Cat senses – are the cats well versed in the field?

Cats also have a sense that probably does not have a man, which works on a similar principle as e.g. birds. Cats can find their way home within a 10-15km radius. They probably use a magnetic field for orientation. As a curiosity, one can cite the result of studies according to which cats with a magnet attached to the collar were much less able to orientate themselves than individuals without a magnet that disturbed the magnetic field. Another theory says that the cat has coded the so-called “Acoustic map of the area”, i.e. it recognizes perfectly characteristic sounds from its surroundings, which allows it to always come back to its home.

Cat’s senses – how well can a cat hear?

In short, it can be said that a cat’s hearing is as perfect as a dog’s sense of smell. The cat can hear the mouse even from a distance of several dozen meters. The cat also perfectly hears sounds that the human ear does not pick up at all from the surroundings.

An important feature of a cat’s ear is the ability to precisely determine the sound source. What’s even more interesting, the cat can selectively catch sounds, which allows it, for example, to determine the place where its prey is, even if another sound source is nearby.

Also noteworthy is the construction of the ear itself, which can move in many directions – the cat’s ear precisely “controls” as many as 30 different muscles. The cat’s ears move independently, so it can set its “radarki”, each in a different direction.

To sum up, don’t be fooled when your frisky pretends he can’t hear you when you call him to cut his claws:) Note that he’ll perfectly recognize the sound of the opening can of food even when it’s at the other end of the house.

Cat’s senses – does a cat understand a man?

If you talk to your cat, you probably already know that the cat understands you perfectly. Unfortunately, many people are probably trying to convince you that this is not true. We have good news for you – cats can recognize the words spoken to them and learn to respond to them very quickly. Clarifying – they understand everything, but react only to words related to food and other pleasant things:) I don’t know how dear reader, but we were very pleased to learn that our minds are not as bad as our aunts say:) it does matter – you probably won’t stop talking to your purse anyway …
However, it is necessary to do justice to dogs who are even more capable of understanding human speech.

Cat’s senses – why does a cat have whiskers? 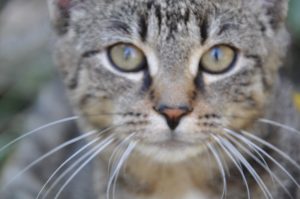 We have already written that a cat uses its mustache, or whiskers, as an additional sense of feeling, useful especially in the dark. For most cats, this is a very important receptor – for example, a cat with a collar attached, very often, at the beginning copes very badly with moving and assessing the distance to obstacles. He can then move as if he was drunk.
Like the whiskers, the cat also uses eyebrows and small hairs on the inside of the paw.